Taking special visitors under their wing

Rayonier Matariki Forests’ Manukaawa Forest in Otago has been playing host to a special guest over the past few months - the New Zealand falcon (kārearea).

A kārearea (aka sparrowhawk) couple chose the Manukaawa Forest as the site for this year’s nesting season. It wasn’t long before the guests multiplied, with the arrival of three chicks in October. They have been under the watchful eye of Parker Conservation ever since, as part of a larger research project being undertaken in plantation forests in the Otago region by the conservation biologists.

Parker Conservation’s aim is to estimate the size of the breeding population, see how successful their nests are and estimate survival rates of adult falcons which were classified as ‘vulnerable’ in 2016, when the project begun.

Falcons choose to nest on the ground in clear cut areas of plantation forests and are vulnerable to predators such as stoats, possums and ferrets, among others, as well as other threats such as being shot, electrocution on overhead wires, and window strike.

Ecologist, Graham Parker of Parker Conservation has been heartened to see that plantation forests in the area have a healthy falcon population. These birds weren’t nesting in similarly high numbers in these areas 30 years ago, so the plantation forests have provided habitat for a special species unique to New Zealand.

“It has been pleasing to see numbers are better than was originally recorded. Given the falcon’s choice of nesting location, we enlisted the help of several local forestry companies to jointly establish a research project, and they have generously contributed funding,” said Graham. “Now this year the Forest Levy Growers Trust has nationally funded the project which has enabled us to expand our efforts.

“Rayonier Matariki Forests joined the project in 2017 and it has been great to have their enthusiasm and co-operation,” said Graham.

The nest failure rate increases in the chick stage when chick noise, smelly nests and increased comings and goings of parents with food, alerts mammalian predators to the nest. Parker Conservation has installed cameras on all nests found, to gain a better understanding of specific threats to the chicks at this stage.

Olly Halleux of Rayonier Matariki Forests said it is a real privilege to work with Parker Conservation on the project and the company has been delighted to get right behind their efforts.

“These are pretty unique forest guests for us. This is not just about funding – our staff and contractors are really enthusiastic about the project and will often be the first ones to discover a nest and alert Parker Conservation. We can then make appropriate plans to avoid and protect the area to help ensure their safety,” said Olly. 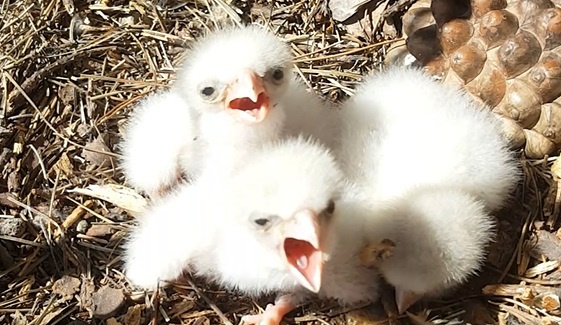